Summer break is over and like most of you I am back in business, and so is the acting vice-chancellor’s blog.

Last week, I had a soft start to the autumn term.  Monday I lectured at a summer school, “Omics in Drug Screening and Discovery”, organized by

NordBioMedNet, a collaborative network involving Master’s Programmes in Biomedicine or related fields at the universities of Bergen, Copenhagen, Eastern Finland, Turku and the Karolinska Institutet. From KI, master students from the Biomedicine, Bioentrepreneurship, and the Toxicology programmes attend. 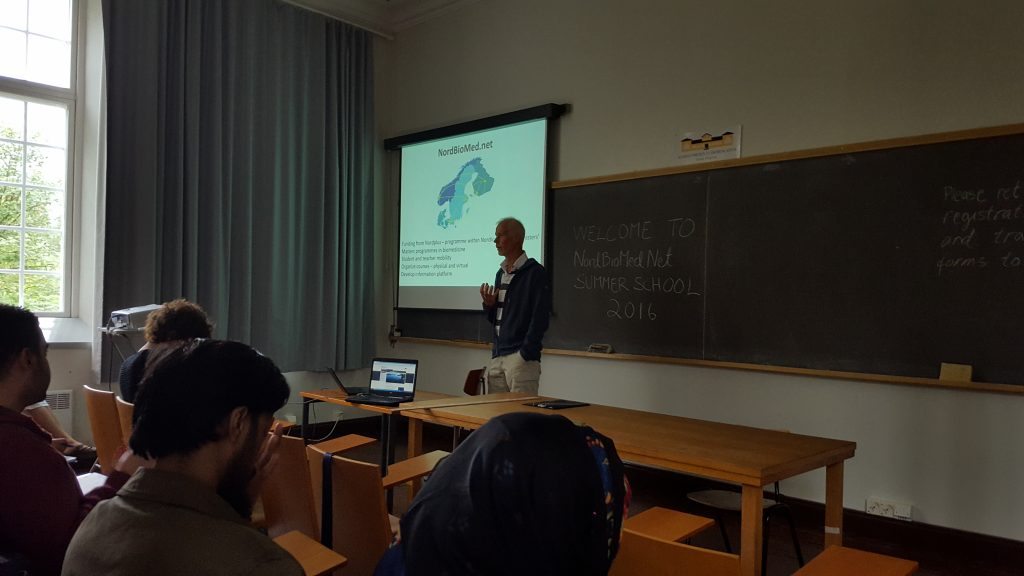 Listening to Lars-Arne Haldosen, programme director for the Biomedicine pogramme at KI and one of the course leaders gives an introduction to the course.

The summer school was held at the remote island Seili in the Turku archipelago, a very beautiful island with an interesting history. In the 1620s a hospital for patients with leper was established at the island. When the last patient died in 1785, the establishment became a place of confinement for mentally afflicted people until 1962. Currently the island hosts the Archipelago Research Institute that is a part of the University of Turku. It was actually the first time I gave a lecture on a scientific topic since my appointment as acting vice-chancellor. 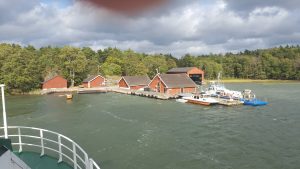 Leaving the island of Seili after an interesting day with students from the Nordic countries.

I really enjoyed meeting the students and truly believe that these courses, where students from different universities, in different countries meet, discuss and work together, provide an important arena to develop knowledge, experience and networks.

Meeting with other rectors in Sweden

Wednesday evening to Friday lunch time, I took part in the “Rectors’ retreat” organized by the Association for Swedish Higher Education (SUHF). These retreats, where rectors from large universities and smaller university colleges meet, provide important insights into the complete and complex landscape of higher education and research in Sweden, and opportunities to look at topics from new angles. Of course many issues were discussed and I would like to touch upon two: The government has proposed a goal for recruitment of female professors for 2017-2019. We all agree that increasing the number of female professors is an important success factor. I think it is important that we are challenged by goals, but goals must also be realistic. The proposed goal for KI is that 60 per cent of all new professor positions over the next three years should be held by women. The goal set for the previous period was 47 per cent and KI reached 36 percent. Today, women constitute about one-third of all professors in total at KI.

The most important thing is that we continue to have an increasing trend, and that this trend is reinforced, but personally I dare not anticipate any sharp upward curve that would be in line with the goal proposed by the government. We will initiate a dialogue with the government to discuss a goal that is both very ambitious and attainable. Make no mistake, KI will not settle in any way but will continue to strive for increased equality at all levels: from our first-cycle study programmes to professor’s and university management level.

The situation in Turkey was discussed. Of course, universities should not act on the political arena. However, Karolinska Institutet is a signatory of the Magna Charta Universitatum and, as such, with over 800 other universities, shares and supports the fundamental principles of institutional autonomy and academic freedom. The Magna Charta Observatory is becoming increasingly concerned about the situation in Turkey and its effects on universities and their staff and students and has published a statement

After this soft start, I am now looking forward to an interesting autumn where we should  all work together to further develop Karolinska Institutet as a world class medical university that is characterized by high ethics, transparency, responsibility and courage.