It was truly a pleasure to join Jeffrey Hall, Michael Rosbash and Michael Young yesterday during their Nobel lectures in Aula Medica. As always, there was not an empty seat in the hall when the Nobel laureates took us on a journey of their paradigm-shifting discoveries for which they earned this year’s Nobel Prize in Physiology or Medicine. 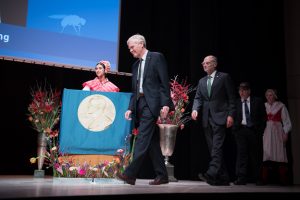 In my early career as a neuroscientist, I shared the common belief at the time that human circadian rhythms were controlled by the brain. Subsequent work – now honored by the Nobel Prize – has told us that this is far from true. Actually, the key to these rhythms lies in specific genes expressed by almost every living cell. The Nobel lectures laid out to us the molecular mechanisms that explain how plants, animals and humans adapt their biological rhythms to the Earth’s revolutions. It is fascinating to realize that living cells couple their function to the mechanics of our solar system. In fact, as Rosbash told us, more than 50 percent of our >20 000 genes are expressed in a rhythmic fashion.

I was pleased to open these lectures as tradition bids. It is one of many events during Nobel week in Stockholm, crowned by the Nobel prize ceremony on 10 December. And it is not only a tradition; the lectures are inspiring for all attendees – students, researchers and international guests alike – and encourage us to consider groundbreaking discoveries yet to come.

When attending lectures of Nobel laureates I guess we all look for the “success factors” – those factors that we would like to emulate in our own working place and institutions. In my mind, this is one of most rewarding aspects of the Nobel lectures: they give us invaluable feedback on how we should support and encourage our own talents. In yesterday’s lectures, good mentorship, a collaborative attitude and uncompromising persistence were implicitly and explicitly brought to the fore as important success criteria, and we were reminded that luck and courage are key elements of any major achievements in the realm of basic research. And we must not forget that science is driven by this singular feature of the inquisitive mind: passion. It was clear that the awardees had passion in ample supply. So much so that one of the lecturers lamented the fact that the fruit fly Drosophila melanogaster was not among this year’s laureates.

Unfortunately, long-term finantial support for high-risk projects are largely missing in Sweden. Often, the emphasis on clinical-, translational-, and applied-researches is hampering basic researches that lead to ground-breaking discoveries more often. Every year, during the Nobel week, Karolinska Institute talks about the importance of basic researches and then forgets it for the rest of the year. In Karolinska, and rest of the Sweden, the emphasis is on number of publications, and impact factors, not on excellent research per se. I call it the "publish and perish" strategy.

On behalf of KI, I wish you all a happy anniversary! You are now celebrating your first 100 years. For 20 of these years, you have been one of our […]

On 1 January 2020, after many years of discussion, the Swedish Riksdag voted to make the UN Convention on the Rights of the Child Swedish law. The Convention was adopted […]