I was very proud to kick off this morning’s seminar Global and Local Health – Legacy of Hans Rosling to share my views on the work of this outstanding scientist, teacher and communicator. 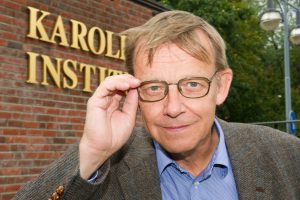 I would like to start on a personal note.

Hans was the one who brought me into the realm of global health and who directed my attention to the stark and unacceptable health inequities in present day society. His work and thoughts provided much of the foundation of The Lancet-UiO commission on Global Governance for Health. This commission – which I led – was asked to identify the political determinants of health and to come up with suggestions for changes.

Now to Hans Rosling’s impact on the world at large.

Hans changed the way we think about the world and its development. He had this almost uncanny ability to inspire – not by glossing over inconvenient truths and sad facts – but by bringing them to the fore. I think that his optimism derived from his unwavering belief in the supremacy of truth and facts – in his belief that facts are inherently persuasive and will force decision makers to act, and to act wisely. Perhaps not today, perhaps not tomorrow, but eventually.

By carefully unveiling the mechanisms of human and societal development – and by looking forward with optimism and an inquisitive mind – Hans was immensely popular among students. In 2012 I invited him to the University of Oslo to give the first lecture in a series on “The Global Citizen”.  His lecture was entitled “A fact based world view”. The queue of students wanting to attend extended several hundred meters across campus. All of a sudden our largest auditorium became too small.

Hans gave lectures that were groundbreaking in their ability to disseminate new knowledge and to question prevailing concepts. Hans was serial myth killer, no less.

Hans was also one of the founders of the Swedish branch of Doctors Without Borders, and was voted into the Royal Swedish Academy of Sciences in 2012.

When the US Magazine Foreign Policy listed the 100 thinkers whose ideas had shaped the world in 2009 – Rosling was number 96, and in 2012 he was included in Time Magazine’s list of the world’s 100 most influential people.

He gave hope for the future

In recent years Hans was a much sought-after speaker. He lectured at the World Economic Forum but also for new students at KI. And the students came first, just as he came first for the students.

But it is not his merits that he will be remembered for. First and foremost he gave hope for the future. Hans spoke about an interconnected world, a world where our destinies are intertwined. He described a global society that faces challenges that we never have seen before – in terms of demography, resource distribution, energy and climate. However, with facts and passion, he convinced us that there is progress in the world, after all.

Hans inspired us to reflect upon health in the broadest possible sense – how health relates to poverty, climate change, human rights, religious dialogue and governance. His message was that we are global citizens and that not everybody shoulders the responsibility that comes with it.

Hans’ sphere of influence extended globally. Together with his son and daughter-in-law he founded the Gapminder Foundation in order to promote global development through the greater use and understanding of social, economic and environmental statistics. When Hans spoke, the world listened. Statistics became alive and its message became compelling. Complex relationships between population growth, economy, and health suddenly became easy to understand when he spoke. When we left the auditorium we felt that we had a better understanding of the world. In fact, we – and I was certainly among this we – could easily feel ashamed when we realized that our perceptions about the world were not well founded on statistics and evidence.

This is exactly what an excellent lecturer should do: Identify embarrassing voids in our knowledge and world view and help fill in the facts we need.

A real humanist and altruist

Sweden’s and the world’s most famous professor of international health, Hans Rosling, lived a life under the shadow of his own serious disease. This did not stop him from working relentlessly toward his goal of improving health and the living conditions of humankind – a goal that resonates perfectly with the overall vision of KI.

Hans moved on the global scene with statistics and large numbers, but he did so with deep respect for the individual. He was a real humanist and altruist. I think he would give his full support to this quote by Martin Luther King: “Of all forms of inequality, injustice in health is the most shocking and inhuman”.

Karolinska Institutet is now in the process of drawing up a new strategy plan. In our new strategy we will look far ahead, all the way to 2030. 2030 is also the time horizon of UN’s sustainability development goals. This is no coincidence, of course. By looking ahead to 2030 we will remind ourselves that KI’s vision – to contribute significantly to the improvement of human health – should be seen in the context of the world at large and with due attention to the wellbeing of future generations.

In short: KI must be more visible on the scene of global health and more attuned to the sustainability development goals. Our mission must be to work for better health, sustainable development, and a fair and tolerant society – in Stockholm, in Sweden, in the Nordic region, and in the world at large. By setting up these ambitions – and by realizing them – we are truly honoring the legacy of Hans Rosling.

Professor Rosling brought global health challenges and progress to life! I've used his talks in my presentations for the last decade. He was a gift to the world and gave us hope for the future.

It was a great privilige to be part of this mornings seminar. Hans Rosling not only spread his health-related gospel in a remarkable way globally, he also created bridges between other important fields of development in eg Africa, in my case agriculture. He clearly saw the need for improved agricultural methods for, not at least, Africa small-scale farmers of whom most of them are women. He saw the important, but often, in today´s Swedish development cooperation, forgotten links between food production, nutrition and health. The Royal Swedish Academy of Agriculture and Forestry awarded Hans some years back the so called Georg Borgström prize for his efforts to strengthen the links between our two sciences. I hope we will be able to continue the work inspired by this extrordinary person. Inge Gerremo Vet.Med.Dr. hc, Honorary Fellow of The Royal Swedish Academy of Agriculture and Forestry

Karolinska Institutet carries out employee surveys at regular intervals. The results from the latest survey were recently compiled and presented to the University Board. It is a gratifying and positive […]

This coming Sunday, 5 June, is formally the last day of the spring term here at Karolinska Institutet. For the first time in two years, we can look back at […]

On behalf of KI, I wish you all a happy anniversary! You are now celebrating your first 100 years. For 20 of these years, you have been one of our […]