A rare event indeed: on May 30 Eric Kandel and Jeff Koons met in Filmhuset Stockholm to talk about art and science. The event was organized in memory of Georg Klein who together with his wife Eva laid the foundations of tumor immunology, a field that has now gained Nobel recognition.

Eric Kandel – himself a Nobel Laureate (prize shared with Arvid Carlsson and Paul Greengard in 2000) – explained how sensory stimuli affect gene expression and synaptic connections in the brain and how memories are laid down in neuronal circuitries. Jeff Koons followed up and emphasized “the beholder’s share” in the encounter with art. The viewer must be given freedom to finish the narrative, he said. He echoed what was the very first comment from the audience: viewers must fill in the blank spaces.

Thus the stage was set for a reunion of art and science. Jeff Koons is undoubtedly representative of the artists of today when he portrays the viewer – and the viewer’s brain – as an active part rather than as a passive bystander. Obviously any esthetical experience will engage our brain and leave an imprint on it. Our creativity is kindled and nurtured by the “blank spaces”. Ambiguities, inconsistencies are what make us ponder. In listening to the dialogue my mind drifted all the way back to Voltaire who allegedly stated that “the secret of being a bore is to tell everything.” 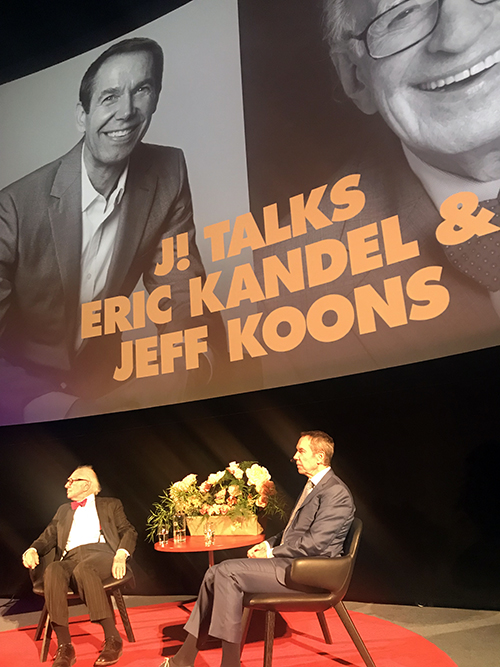 Jeff Koons took the whole thing one step further when he described his motivation behind his “gazing ball paintings”. By adding gazing balls to famous masterpieces he set out to bolster the connect between artwork and viewer. The viewer is “affirmed” when seeing the reflex of herself or himself in a piece of art. The viewer is part of the art. And is affirmed as such.

If the late C.P. Snow had been listening into the Kandel/Coons dialogue, he would have seen the dialogue as exactly this – a meeting between the two cultures. But there is a long way to go. Eric Kandel admitted that we do not know in any detail how art impacts brain. Modern imaging techniques are now being employed to address this issue, and results are in the offing. Thus far we have to refer to our subjective experiences: on a personal note I often find myself energized, invigorated, refreshed after having attended an art exhibition. It is just as if my cognitive playing field has been expanded. Perhaps this is the essence of it all: that art encourages us to look for solutions – scientific or otherwise – beyond the spotlight that we currently apply.

This is exactly what happened to Niels Bohr, shall we believe Christophe Schinckus. In a recent paper entitled From Cubist Simultaneity to Quantum Complementarity he discusses how Niels Bohr might have been inspired by the cubist painter Jean Metzinger when he formulated the complementarity principle. The cubists allowed different perspectives of an object to hit the eye simultaneously from one and the same canvas, while in Bohr’s world, an electron could be both wave and particle at the same time. A striking parallel. A case of art and science being joined in entirely new ways of thinking.

Art gave Niels Bohr the impetus and perspectives he needed to reconcile pieces of evidence that appeared utterly unreconcilable.

The dialogue between Eric Kandel and Jeff Koons was a successful attempt to reunite art with science. This event took place just as we celebrate the genius of Leonardo da Vinci, who died on the 2nd of May 1519. Leonardo stands as a one-man distillation of the union of art and science. Trained as an anatomist myself, I have always admired the way Leonardo exploited his insight in human anatomy – and in other sciences – to give us pieces of art that have been eclipsed by few if any during the 500 years that have elapsed since his death. Leonardo da Vinci transformed science into art just as we know that art can inspire breakthroughs in science.

Since 2017 Jeff Koons has been Artist in Residence at Columbia University – a telltale sign that one of the world’s leading universities sees the benefit of bridging the two cultures. Karolinska Institutet has no artist in residence but we have our annual culture days. The next KI culture day is 18 October. Save the date!

The dialogue between Eric Kandel and Jeff Koons was organized by J! (Jewish Culture in Sweden) in collaboration with Eva & Georg Klein Foundation and Karolinska Institutet´s Kulturråd. The organizers acknowledge support from Filmhuset, Stockholm Stad, Kulturrådet, and Region Stockholm.

Svensk version nedan Each year on this day, the 10th of December, the world’s attention turns toward the Nobel Prize ceremonies in Stockholm and Oslo – a celebration of extraordinary achievement […]

The news that reached me yesterday morning instilled a mix of desolation and disbelief: Swedish citizen and KI alumnus Ahmadreza Djalali might face execution in Iran. In a phone call […]