As we continue our efforts to create a new and better KI, Pro-Vice-Chancellor Henrik Grönberg resolutely leads the effort to discover any and every suspicion of scientific misconduct at Karolinska Institutet. For this purpose, he and University Director Per Bengtsson visit all our departments. During the same period, as late as last week, we have identified suspicions of scientific misconduct in another scientific article where Paolo Macchiarini is one of the authors. We do not know if the suspicions are founded, but will urgently investigate this. For us it is important to talk about the matter at an early stage so everyone – not least co-workers and students but also the general public – will know what is going on. KI will we never compromise with ethical values.

Last week we were publicly criticized for the handling of the common infrastructure of biobanks, Biobanking and Molecular Resource Infrastructure Europe (BBMRI). KI is the host university for BBMRI in Sweden and in mid-March the Swedish Research Council decided not to continue funding BBMRI. The council has initiated an audit, which I welcome and KI has in its pipe-line an independent external audit . Further comments at ki.se. 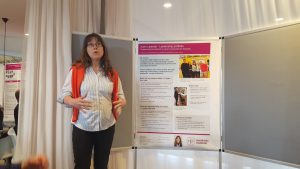 Poster presentation on the last day of the leadership course for group leaders.

This Wednesday, I had the pleasure of addressing the participants of the course “Leadership for Research Group Leaders” on their final course day. I want to thank you for inviting me –  I really enjoyed listening to your visions and your goals as leaders of your research groups. You represent the future of our research and education activities!

The research group as an entity constitutes the core of our research and education, and group leaders are critical to our ambition to maintain high quality in our activities. My editorial “The way forward” in the last issue of our staff news magazine KI Bladet, addresses the importance of strong but responsive and humble leaders for our research groups in the future KI that I envision. Our aim must be to let the group members grow to their full potential. Within the research group there should be a lively debate on science and ethics. Leadership training, like the research group leader course, play important roles to empower our present and future leaders for their tasks and also to establish networks that will assist them in their future careers.

Important discussions at visit to KI at Södersjukhuset 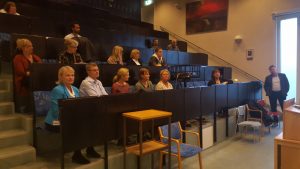 Staff at KI’s Department at Södersjukhuset.

Later the same afternoon, the university director Per Bengtsson, and myself, went to KI’s Department of Clinical Science and Education at Södersjukhuset. The meeting was a follow-up to the meetings for all KI employees that we held at the Solna and Huddinge Campuses in the beginning of March where it was correctly pointed out that KI is more than the Solna and Huddinge Campuses. As we are now almost two months ahead, the meeting was held in a slightly different context, and we took the opportunity to give a short brief of the activities we have initiated so far to strive for a better KI. Other important things that were discussed were the specific challenges associated with clinical research for instance the sometimes unclear definition of the research group, the interface between K and KI, and informatics. It is very valuable for us to visit our different environments, something that we should do more often. Both Per and myself hope to be invited soon again!

Svensk version nedan As we approach the holiday season, I would like to extend my heartfelt thanks to our students, staff and friends throughout the world for your support, perseverance […]

Svensk version nedan Today I published a new video aimed for staff and students at Karolinska Institutet. Watch the video here:   ﻿   And here is the text in […]