Karolinska Institutet’s vision is to make a significant contribution to the improvement of human health. In relation to this, it was fantastic to see the campus in Solna filled with happy – and in many cases dressed up – KI people walking, running and socializing at KI-Loppet 2016.

Thank you, everyone who contributed to making this a great event! 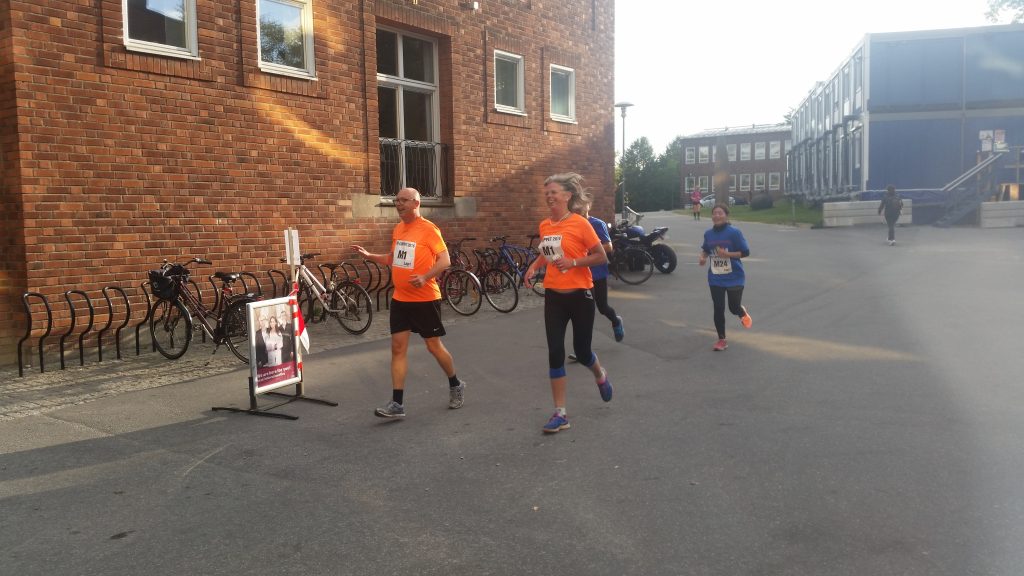 Henrik Grönberg and myself at the traditional yearly KI-Loppet.

Henrik Grönberg and myself had a very pleasant run. Contributing to the improvement of human health includes to prevent disease where physical exercise is one important component. In line with our mission to perform research and education and to interact with the community, KI scientists are involved in, and lead, many research project and educational activities related to the role of physical exercise to prevent disease and/or its progression and contribute this knowledge to individuals and the society. For instance, the same day as KI-Loppet took place, one of our research teams, led by Professor Carl-Johan Sundberg, published findings relating to the effect of physical activity. The study, headed by Dr. Maléne Lindholm, shows what happens at the molecular level during endurance training. The study is published in the journal PLOS Genetics and there is a popular version at ki.se/news.

In the KI management we are now working on the action plan that I shall present to the Karolinska Institutet board October 10th following the Heckscher report. Several aspects will build on activities that we have already initiated orwere on the way to roll out in the beginning of this year, including improving our internal culture, an overall quality system and how KI is organized. The project to improve internal culture was in fact something that I was tasked with when I was appointed pro-vice-chancellor, but then did not have the capacity to prioritize as stepped in as acting vice-chancellor. This projects involves looking at leadership, teamwork (medarbetarskap), physical and psychological working environment and equal rights. This work should be intensified. Another project that I was supposed to work on in my former role, is the overall quality system. In this project I have previously talked mainly about quality development but an equally important aspect is quality assurance – that we follow the rules and regulations that are placed upon us. Here we need to improve. Strategy 2018 states that “The internal organization has to be reviewed in several dimensions.” Included in this are responsibilities in the interface between KI and Karolinska University Hospital. Furthermore, we should discuss our core values and we should improve communication to make sure that we have a climate where communication works in all dimensions and is characterized by transparency and that everyone gets the opportunity to be heard. These are some of the aspects that will be further detailed in the plan.

The overall focus, communicated by the minister for higher education, Helene Hellmark Knutsson, is on specific challenges for society including climate and environment, health and life sciences including a sustainable society and digitalization.

The minister reiterated the government’s intention to focus on equal opportunities, attractive career paths including mobility, increased interaction with the surrounding society and that higher education should be supported by good research environments. The latter implies presumably specific resources to higher educational institutions where study programmes are not supported by research environments of high quality. There will be significant investments to increase the volume of teacher education which is clearly a high priority. Specific investments to make sure that the increased teacher education is supported by good research environments were also out-lined.  Similar initiatives for KI’s field of education and study programmes were not presented.  The government’s intention to intensify follow-up and evaluation was also clearly communicated.

Additional details will follow in the research bill that is now said to be presented in the middle of November. What is already clear, is that additional resources will be provided to the sector. The largest single resource addition is to university basic funding. How this will be distributed is not clear. However, since one focus is that higher education should be supported by good research environments that could imply that additional resources will not primarily target research universities such as our own. Furthermore, overall more resources will be provided to the research councils (particularly Vinnova in line with the focus on specific challenges for the society) than university basic funding, which will further limit the sectors freedom of action, i.e. strategic decisions. Overall one can envision challenges as we are expected to carry increased responsibilities for infrastructure in the future, should this not be reflected in increased basic funding.

In her forward look, the minister focused on management of academic institutions, internationalization and lifelong learning. The latter referring both to the individuals’ possibility for increased competence but also to change profession. Following the presentation was discussion on the challenges in managing academic institutions including the relation between the board and the vice-chancellor, the latter a topic that has caught attention in relation to the Macchiarini case. As many of you might remember, Stockholm University’s former vice-chancellor Kåre Bremer has presented a proposal on the management academic institution – Utvecklad ledning av universitet och högskolor – but as of yet it is unclear what this will lead to but earlier this year it resulted in a proposition on the appointment of members of higher education boards.

A vibrant, active university must constantly reform, rejuvenate and renew itself. Sometimes – for one reason or another – a great many changes happen in a short time. Karolinska Institutet […]